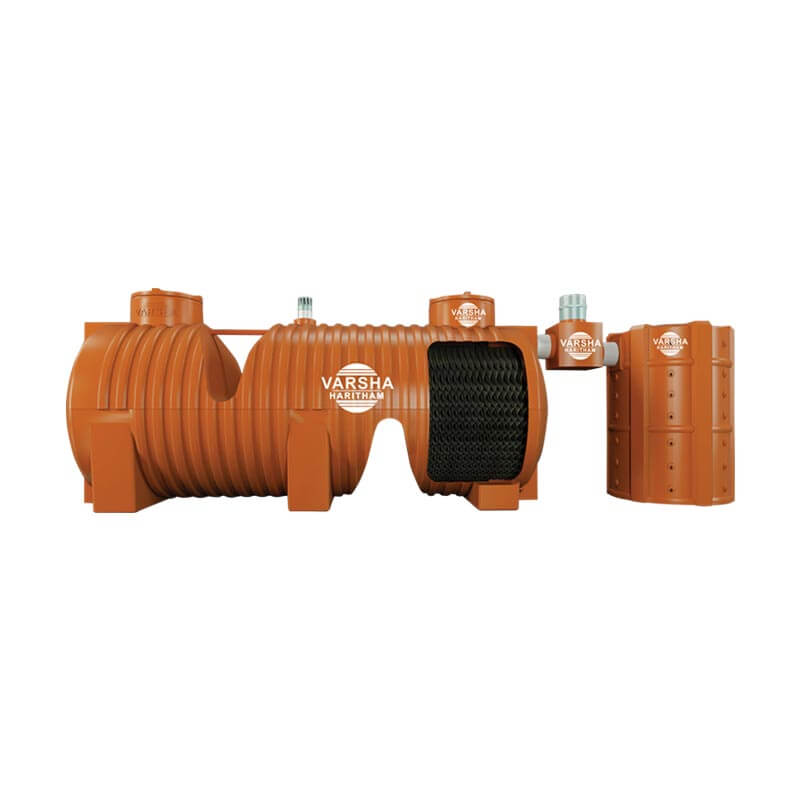 Varsha Haritham is an innovative septic tank made out of 100% virgin LLDPE (Linear low density polyethylene). It is an advanced Polyethylene septic tank with anaerobic media for optimum BOD reduction, Chlorine diffuser for destroying pathogenic bacteria, off gases releasing system for avoiding of bubbling of off gases and advanced polyethylene soak pit which enables percolation of treated water into the ground. Thus Varsha Haritham ensures safe potable water in your open well as well as your neighbours well too.

As a halogen, chlorine is a highly efficient disinfectant, and kills disease- causing pathogens, such as bacteria, viruses and protozoa. The water coming out from septic tank will be rich in pathogenic bacteria. This water when enters though the chlorine diffuser, will be supplied with adequate amount of chlorine which disinfects the outlet water by destroying pathogenic bacteria and also reduces the BOD (Biological Oxygen Demand). Thus the water can be disposed off safely.

As our population gets increased, our towns, cities, and villages are thickly populated and the setback between the septic tank soak pits and drinking water sources are reduced from the stipulated distance. As a result the drinking water sources are being contaminated by pathogenic bacteria. Our present invention eliminates all the problems faced by the existing plastic sceptic tanks, such as bubbling of offgases at closets, high BOD at septic tank outlet water resulting in foul smell, presence of pathogenic bacteria at outlet water, mixing of percolated septic tank outlet water with ground water etc.

Thus HARITHAM is becoming the owner’s onus and neighbour’s pride as we are normally tend to place the septic tank near to our neighbours. As it will take 2months for anaerobic bacteria to be attached in the trickling filter, optimum result will be obtained only after first usage.

Anaerobic attaching media (Trickling filters) have been widely recognised as a reliable method for biological oxidation of organic wastes. Biological growth on surface of Packing Media converts dissolved organic waste into by-products like carbon di oxide, methane, nitrates and water, thus reduces the BOD (Biological Oxygen Demand) to a large extent. The Trickling filter media used in the newly invented plastic septic tank system is 0.4mm thick PVC anaerobic packing media. The cross flow design of this anaerobic packing media offers high performance. The media used have a large specific surface area, up to 240 square meters per cubic meters of media. The voidage of the trickling media is very large and is more than 97%. The media is arranged in such a way that the septic water enters through the packing media. The corrugated pattern provides continuous and uniform horizontal redistribution of water with no channelization or shortcut circuiting. The result is maximum utilization of media surface and increased retention time of the waste water in the media, especially at low hydraulic loadings. The increased surface area increases the bacteria action and decomposes the organic wastes more efficiently.